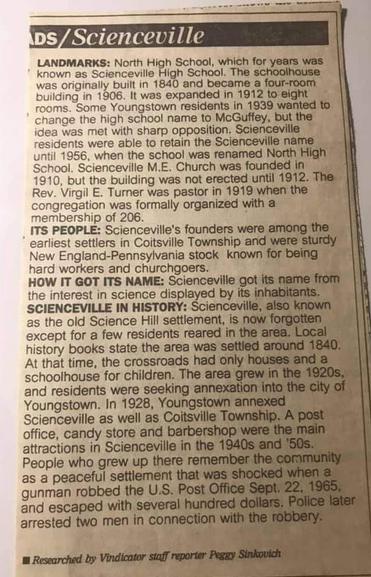 Where Bulldogs, Bears, and Tigers live and play together

The Sharonline is a group of neighborhoods on the east side of Youngstown.  These neighborhoods have no official lines of demarcation; however, the borders can be loosely defined as extending north and south from the Hubbard town line to McKelvy's Lake.  The east and west borders extend from State Route 616 to the west side of Lansdowne Blvd.

Historically, the Sharonline is a diverse set of cultures and backgrounds.  The original settlers were Irish immigrants, yet that Irish connection is small.  As the east side developed, the dominant group for many years happened to be Italian, and finally the Sharonline became largely Hispanic, Latino, and African-American.

The name "Sharonline" evolved from the trolley that ran from Sharon, Pa, to Youngstown, Oh.  What makes the Sharonline special?  The same thing that makes every neighborhood special, the people and the history the carry forward.

- One story in the settlement of the Ohio Country

Before there was a Sharonline

- a history we should know

The People of Mount Hope

- history unique to the Sharonline